"Oh how I loathe the sun, Its sharp and blinding light, Averting our gaze from what lies beyond sight, A future of ruin, deceit, and betrayal."

Rangda is a Top Moon element DPS & Debuffer. Playing her has a risk in form of constant self debuff, but when time comes, she will inflict all foes with stack of debuffs while dispeling her own.

Breaking a woman's heart was never a good idea. Especially if we're talking about those who meddled with dark arts. Her broken heart made Rangda furious and caused chaos on Earth. Devouring boys, so they don't grow up to be a man full of lies.

A vengeful, yet sometimes compassionate Atma, Rangda holds a great deal of contempt for men. A patron of the dark arts, she was left in anguish after a man that she loved broke her heart. Afterward, she vowed to rid the world of lies and falsehood – by enveloping it with the cold, eternal embrace of the night. 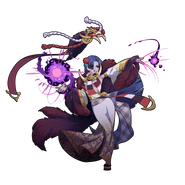 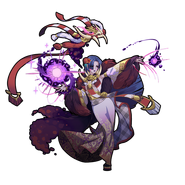 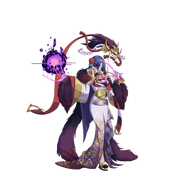 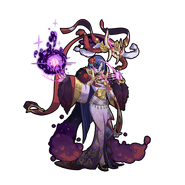