"I am what I am. The soul of Princess Amba dripped into me, Father."

Srikandi is a fire-based ranger Atma that can deal high, sustainable damage while also giving ATK UP buff to her allies as long as she deals critical damage. She can also inflict BURN and DEF DOWN debuff when she attacks.

Srikandi's active skill "Vital Strike" will deal damage to the foes in the front row and give buffs to amp her attack more.

Legends said humans were given four chances to reincarnate. Memories and pain die with mortal bodies, allowing a pure reborn, not with a single burden.

Enduring grudges for three lifetimes is not an easy burden to handle. No matter how many times Srikandi reborn, the memories of her past lives stay within. Throughout her life, Srikandi never felt this excited to face a war. But, when all hopes lie on her feet, will Srikandi be able to bring his army to victory? Can she fulfil the destinies that weren't her in the first place?

First cycle. She was a poor and helpless woman. Being forced to marry a heartless landlord, sold to pay for debts that were wrongly imposed on a poor peasant. Her honor as a woman was deprived, cheated, tortured, and enslaved. The life of a lowly peasant like her meant nothing to this world. But, that day for the first time in her life, she screamed for help. Despite that, justice was unjust to her. Prince Bisma ignored her plea for help. The torture she had to endure multiplied a million times. That pain turned her life upside down. She was lying in the middle of the forest, with both legs crushed and an arrow stabbed in her chest. At least her misery would end soon, and she will reincarnate as a new free human without a painful past. In her last breaths, she wishes Bisma could feel the pain of dying like that.

Only grudges that could break the bound of the cycle of life. Disrupting peace, demanding justice.

Second cycle. She was born Princess Amba from the Kasi Kingdom. But being born as a princess didn't simply make her life peaceful. Throughout her life, a flame fueled by having to witness injustices burn inside her. She always thought that fire was caused by the childhood memories she suppressed.

One day she remembers everything; In her previous life, Bisma ignored her plea and delegated his responsibility to other people. Abandoned his duty to uphold justice for a peasant like her. That evening, the memory of her dying moment came back to life. Two cycles of life she has been through, and Bisma is still the cause of her misery. Restlessness flared in her chest, the same feeling she experienced in her final moment in her past life; she wants to see Bisma die. With his Godly power, no living man could ever kill Bisma.

Third cycles. In this life cycle, Amba is reincarnated as Srikandi. Even after being born as a princess for the second time, the fiery grudge within her hasn't died out. Lasting with a faint restrain, thanks to Amba's presence to share the burden with her.

Srikandi felt that her training with some of the best masters and sparring with the strongest rivals aren't enough. Later, she marries Arjuna, the strongest archer that trained under Master Drona, and Bisma's own grandson. Together, they join the Kurukshetra War, the war between Pandawa and Kurawa. They fight Dewabrata Bisma on the battlefield and get all of the answers that left unspoken before. 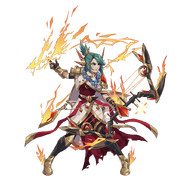 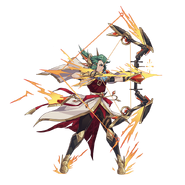 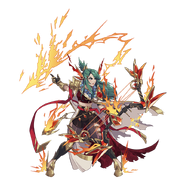 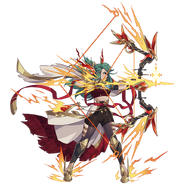 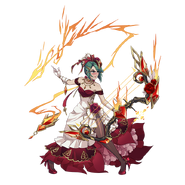 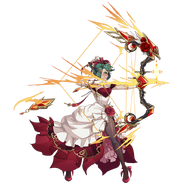